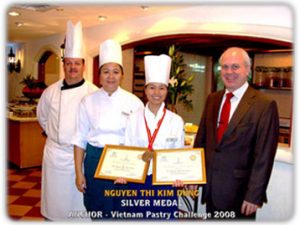 Kim started her passion for cakes and pastries when she was completing her Professional Cookery Skills Course at the Technical Secondary School of Tourism & Hotel of Ho Chi Minh City (Saigon, Vietnam). After completing her Internship at Omni Saigon 5-Star Hotel, now Eastin Grand Hotel Saigon, she was offered a position within the pastry department and over the next six years Kim developed her pastry skills with numerous International chefs such as Chef Jens Heier, Chef Daniel Aeschbach, Master Pastry Chef Jean-Francois Arnaud and Pastry Chef Robert Jorin to name a few.

During her time at Omni Saigon/Movenpick Hotel Kim won various awards including: 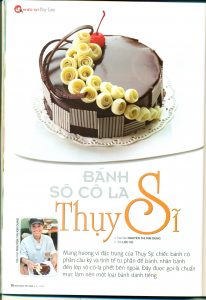 This led to a once in a lifetime opportunity of being selected to travel to the Middle-East and be trained by the Master Pastry Chefs at Movenpick Hotel, Jordan, where Kim expanded her already vast knowledge of the industry.

After moving to Wagga at the end of 2011 Kim decided Wagga was in need of a quality cake supplier and ‘Sooo Delicious’ was born. Kim is currently Artisan Baker So French So Fresh’s Head Pastry Chef working with renowned French Baker Bernard Hoff.